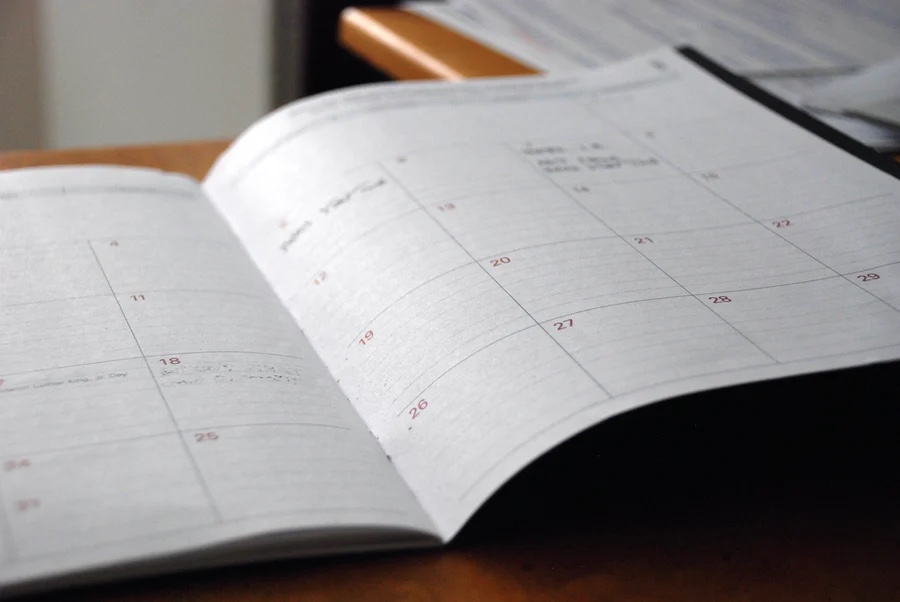 I like to consider myself a pretty organized person. There are times when I can’t proceed with anything work-related unless the glaring pile of dishes are remedied, or until any other household chore is accomplished. Call it willful noble procrastination, if you like — I prefer to see it as the nourishment of my efficiency. I won’t say that this happens all the time, but, I digress. In any event, one of the practical helps that’s allowed me to stay organized as I’ve transitioned into the role of senior pastor has been the practice of using a pen-and-paper desk calendar. On top of making use of a digital calendar that’s synchronized across multiple devices is the redundant use of an analog calendar that sits prominently in the middle of my desk. This is used to jot down events and appointments I really need to remember, church-related or otherwise.

This system of redundancy works . . . usually. Although I must admit I’ve used more white-out in the last thirteen months than in all the previous three decades of my life combined. An untold number of appointments have been rescheduled, postponed, or otherwise canceled in light of this year’s “accoutrement.” Events have been planned, coordinated, and slotted into my calendar only to be scribbled out soon thereafter. This viral scribbling has been the death of me, if I’m honest. But it’s been a good death.

What’s been slowly dying is my sense of control. My mastery over my days. Each time I’ve had to white-out something I’ve planned, I’m reminded of this simple but life-changing fact: I don’t rule over my life. For all the effort I exert in the attempt to “grab life by the horns,” so to speak — to seize control of my days — I am confronted by the frustrating reality of my own failure to do just that. I can’t foresee what future days might or might not hold. I’m utterly incapable and impotent when it comes to planning the days that lie ahead, let alone weeks or months.

And that’s okay, because that’s the prerogative of Someone much bigger and much better than me.

Every time I’ve been forced to white-out some such plan, I remind myself that there’s One whose plans have never changed. God’s plans have not been upset or upended by anything that’s transpired in the last year, in the last week! His calendar is unalterable. He’s never had to use white-out on something he’s arranged. God has always and only had a Plan-A. He has no “Plan-B.”1 He’s never had the need for a contingency plan in case his primary plans are thwarted or frustrated. He doesn’t have a “break-in-case-of-emergency” strategy. He’s entirely unfamiliar with such a concept. He’s never — not even for a nanosecond — gotten nervous because of how this year’s unfolded. He’s never wrung his hands anxiously about what’s going on in our world. Even now, his plan is right on schedule and it is perfect (Ps. 33:11; Isa. 55:8–9). No matter what the days might hold, we can give thanks because God’s “faithful love endures forever” (Ps. 136:1).

Even in the darkest hour of the deepest agony, God’s plans move forward according to His sovereign authority. That’s what the Bible’s all about. The pages of Scripture were written to reveal the Christ and to make us certain about an eternity that’s already been written. About a future that’s already planned out (Eph. 1:4; 1 Pet. 1:20; Rev. 13:8). He’s already ordered the “end of all things” (1 Pet. 4:7). His sovereign fingers sustain all days and times and events moving forward according to his purposes. His plans are infallible. “God — his way is perfect; the word of the Lord is pure. He is a shield to all who take refuge in him” (Ps. 18:30).

Therefore, for as much as my compulsive self finds it grating to keep on whiting-out events which have been coordinated and arranged for weeks prior, it’s actually part of God’s grace to have plans rescheduled. Because even if I can’t rely on my calendar, that thing to which I ascribe so much confidence, I have a much better source of confidence. A better Rock on which to rely. A better Certainty on which to stake all my hopes and dreams. And his name is Jehovah. “For who is God besides the Lord? And who is a rock? Only our God” (Ps. 18:31).

In a world where whiting-out your calendar is normative, I’m so grateful for a God who doesn’t change. Not even a tiny bit. And, as I’ve come to learn, I’m thankful for the grace of a whited-out calendar.